As the saying goes, this is a good thing and a bad thing. The good thing is that you can find whatever density that suits your mood. The bad thing is it takes a lot of searching and discarded images before finding something good.

In yesterday’s picture, Sequence Fractals Part V #8, notice three hot spots near the center. One in the exact center and two a little to the left above and below the horizontal center line. Today’s picture is a zoom into the top of the central hot spot.

The image suggests an abstraction of waves or trees. The white on the bottom suggests a fresh snowfall in the forest. That is serendipitous. I created this only to demonstration the cutting and chopping that results from non-integer exponents.

At the top the cuts are sparse. They get more dense in the middle to the point where the individual cuts are indistinguishable. Eventually the cuts are so dense, they are sub-pixel resulting in gray sand. I turned capture coloring back on, the white at the bottom is part of the capture set.

Much more could be said about the rational functions in the previous posts. Rational Functions deserve their own topic, so I will not go there now. Let’s switch to non-integer exponents, starting with half steps (square roots).

If you are familiar with complex numbers you know that the square root function has a discontinuity along the negative real axis. At every iteration step, for those orbits that are close to the negative real axis we put them into two groups. If you are above (or on) the axis you go here, if you are below then you go there. Of the points near -4, half will be sent close to 2i and the other half close to -2i. This creates discontinuities (tears) in our pictures.

Choosing the negative axis is a convention. The cut could be made along any line from 0 to ∞. (For that matter it could be any simple curve from 0 to ∞.) There is no way to avoid the discontinuity. It is always there, and always starts at 0. This is true of all non-integer exponents.

Today’s picture is only here to demonstrate the cracks and tears that will be present for the rest of the pictures in this series. 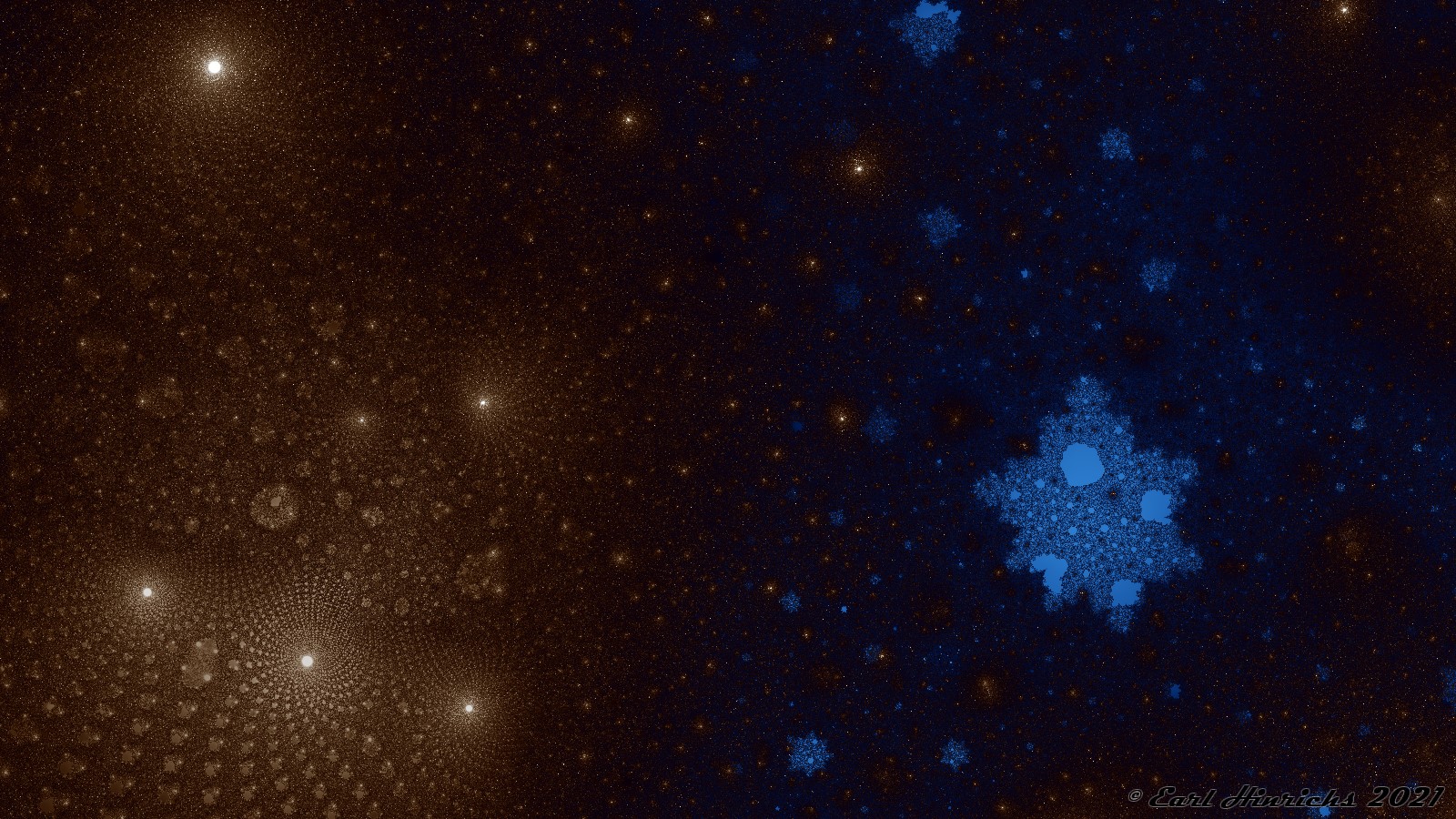 Combining two steps of this sequence fractal give the rational function

. As with polynomial sequence fractals with a two-step sequence this is actually a picture of a degree 4 rational function.

These take a long time to render. Every point runs to the full iteration limit. My code is very inefficient, each step uses complex exponentiation. At higher iteration levels, most of the artifacts will disappear and the image will look like a sea of colored sand, containing a few smooth islands. (I was going to optimize the code and create such an image, but I ran out of time.)

As mentioned yesterday, (non-polynomial) rational functions do not have points that “escape to infinity”. That forces some changes when making pictures of the capture set. You cannot set a large radius and say when the orbit leaves that radius that it has escaped. In fact, the orbit is almost guaranteed to return. Perhaps another way to look at it is that since infinity, ∞, is just another point, nothing ever escapes.

To be sure rational functions still have critical points, and fixed and periodic points which may be attracting, repelling or indifferent. All the rich dynamics of polynomials are still present.

These images are generated without an “escape test”, and also without an “inside color”. There is of course an iteration limit. All orbits are run up to the full iteration limit. It does not make sense to color by iteration count, or to paint all the points that reach the iteration limit the same color. The coloring is based on a scheme I described in the series Smooth Colors in 2019. This scheme works well even when the concept of escape and capture are absent.

There are still attracting fixed points and cycles. With this coloring, they show up as smooth areas with gradually changing color.

Up until now with the sequence fractals, each step of the iteration is a polynomial function. Different polynomials to be sure, but always a polynomial. Now with the addition of negative (integer) exponents we enter the realm of rational functions.

I have worked with rational functions in the past. That was prior to the most recent full site reboot, and I have not restored those older images yet. In general, the dynamics of rational functions are well-studied. Rational functions are studied on the Reimann sphere which is the complex numbers with the addition point, ∞, infinity. This makes “division by zero” possible. Also “escape to infinity” is just convergence to a point (∞). Lines are circles, and other cool stuff.

On a Reimann sphere, ∞ is an attracting fixed point when iterating a polynomial. But for a non-polynomial rational function, ∞ is just another point. An orbit can easily land on ∞ and then move on to other points. As an example, consider that the negative exponent (a power of the reciprocal) of a very large number is a very small number.

There is a lot of potential here. This satisfies my original goal to find formulas that generate “Mandelbrot set plus a little more” for when you cannot find anything new in z2+c. But I am going to set aside further exploration of positive integer exponents for another day.

This is in the same vicinity of yesterday’s picture, Sequence Fractals Part V #2. This time one z+c followed by nine steps of z2+c.

There is another way to look at this pattern. If you combine the ninth step, z2+c. and the tenth step, z+c, you get z2+2c. So the pattern could be described as throwing in an extra +c on every ninth step.

The usual z2+c, but replacing every fourth step with z+c

Sequence Fractals Part V will feature formulas where the exponent of z contains the sequence variable. As before, we will start gently, then go crazy.

Here is the simplest such formula, the sequence variable replaced the exponent 2 in the normal quadratic formula. Ironically, this form did not occur to me until I tried several others, and then started to prepare posts for the blog. So the blog will not be following the same path as my personal journey through the exponents.

Today’s sequence consists of two repeating integers. The result is similar to the previous Sequence Fractal sets. As long as we stick with positive integers in the sequence, each iteration is a polynomial function.